Shades of Simon, a refreshingly new 5-piece band presenting a full 2 hour theatre show in tribute to Paul Simon as one of the best songwriters and performers of his generation.  With an engaging narration, exceptional musicianship and authentic renditions of the best of his songs from Simon & Garfunkel through to Graceland, this is a show that appeals to all generations… 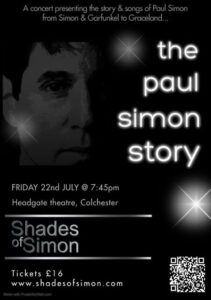 Although the folk duo Simon & Garfunkel only performed together for a comparatively short period between 1963-1970 they have sold over 100 million records and their iconic songs like The Sound of Silence, Mrs Robinson, The Boxer and Bridge Over Troubled Water have become standards enduring the test of time.  As artistes Paul Simon and Art Garfunkel had a stormy relationship and both pursued separate careers following their premature breakup. Although Art Garfunkel is renowned for his incredible vocal range it was Paul Simon who was the mastermind behind the writing of their songs and he continued to pursue a highly successful songwriting and solo career right through to his retirement from touring in 2018 at the age of 76.

Shades of Simon are a band of musicians with a lifetime of experience who love the music of Paul Simon and who have been brought together for the specific project of creating a theatre show to celebrate the story of his life, incorporating a narrative and authentic performances of the best and most memorable songs of his 60 year career, from solo acoustic through to full productions as a 5-piece band.  Featuring Colin Davies (vocals, acoustic guitar & keyboards), Paul Bleach (piano & vocals), Kelvin Ward (bass guitar), John Austin (electric guitar), Dave Johns (drums & percussion).

Not sure what to expect? Watch the promo video here